When the meditation is done with the photo, it is better done with open eyes.

The Deeper Meaning: “I am in the Photographs”

Mother, what is there in Your photo?

What do you mean?

What does it represent? What is there in Your photos?

Don’t you know what is there? (Mother smiles)

It is I who am there. I am myself there in the photo.

But in what form are You there?

To someone it is the aspect of Kindness, to another, it is another aspect of Calm, of perfect Serenity, of Mercy, of Compassion, of cosmic Truth, of eternal, infinite Consciousness, or else the aspect of Power, of Humility and of divine Sweetness and so on, which is represented in the same photograph.

It varies with each individual, each instant and each attitude, it is something new. It is constantly changing. I am never the same. It depends on the indications and many things. In each photo I am different and to each one I reveal myself in a distinctly different way which is right for him.

Usually in a photo it is one of my infinite states of Consciousness and varied moods of expression caught eternally in a moment — the Universal Mother in Her infinite forms. It is for you to find out which of my aspects predominates in each photo — what strikes you when you see the photo.

You must feel and find it. In each photo it is a different aspect of myself which is revealed. It is an entity that is present. It is not a picture on a piece of paper, but a living Presence, a vibrant Force and an Entity or an Emanation which is projected and which has a power of action and formidable means of execution.

Anyway, it is a part of myself, materialised, concrete, which reveals itself in such a way that the Force can act through the photo itself, because there my Presence is living and a portion of myself is manifested in the photo.

It also depends on the person to whom I give the photo, on what he needs, at what moment, for what reason and why; all this plays a very important part. That is why it is never the same personality or the same aspect which reveals itself. But it depends on many things, according to his state of consciousness, his temperament. In fact, it varies constantly. For you it may be one thing, while for another it may be completely different, although being the same photo. That is how it is. …

When I sit in meditation before the Mother’s photographs or the painting of her feet, I get more Force than when I sit at a distance—on my easy chair, for example. I have noticed that this happens invariably and I suppose it is not subjective merely. But I want to know the real truth from you.

No, it is not subjective merely. By your meditating near them, you have been able to enter through them into communion with the Mother and something of her presence and power is there.

Your experience about the photograph was a very fine and true experience. The Mother’s presence can be felt through the photograph by one who regards it with devotion towards her. It was her true presence that was there, her subtle physical presence and all you felt was true. It shows that your physical mind is opening to the true consciousness. It is quite sure that this will grow and the remnants of the old movements are bound to disappear.

Yes, very many do.

Sometimes in that state I pray; sometimes the inside is void—no thoughts or words at all, so I simply gaze. Am I pursuing the right line?

X is very pleased to have the photographs of You and Sri Aurobindo. He told me that he felt a distinct change in the atmosphere of his room after he had opened them. Mother, when I kept in my room that photograph of Sri Aurobindo, which I received from Your hands, I too felt that it was vibrating with life. Isn’t this because of Your touch?

Sri Aurobindo and I always put a force into the photographs we sign. In the present case Sri Aurobindo had also looked at the frame and admired it.

Mother said she would try to make you see her because it is not always easy for people to see her even when she is near them. It is also easier to see with eyes shut than with eyes open—though this too is possible—because it is a sight within you that has to open in order to see her. It is not necessary to call her for any fixed number of hours. It is enough if you love her always, remember her often, sit every day a little time before her photograph and call her.

As one approaches your photograph in the Reception Room, there is a feeling that it is an emanation of yours. There seems to be a special light in it.

The Sadhaks may themselves bring this light by approaching me through the photo.

Ah, let me show you a photo that was taken the other day, on P.’s birthday (Mother holds the photo out to the disciple).

It’s not me looking here: it’s when I give a “bath of the Lord.”

Even in the photo, the light in the eyes can be seen.

Some people get frightened, others on the contrary are happy—it’s an instantaneous sorting. And I know, I know what this look is: it’s the moment when there is no personal consciousness left, it’s completely gone. There isn’t the sense of a person anymore: it’s the Force.

But it’s the first time it’s caught in a photo. T. had asked for my permission to come and take photos.

Mother, what does this photo of Yours represent? 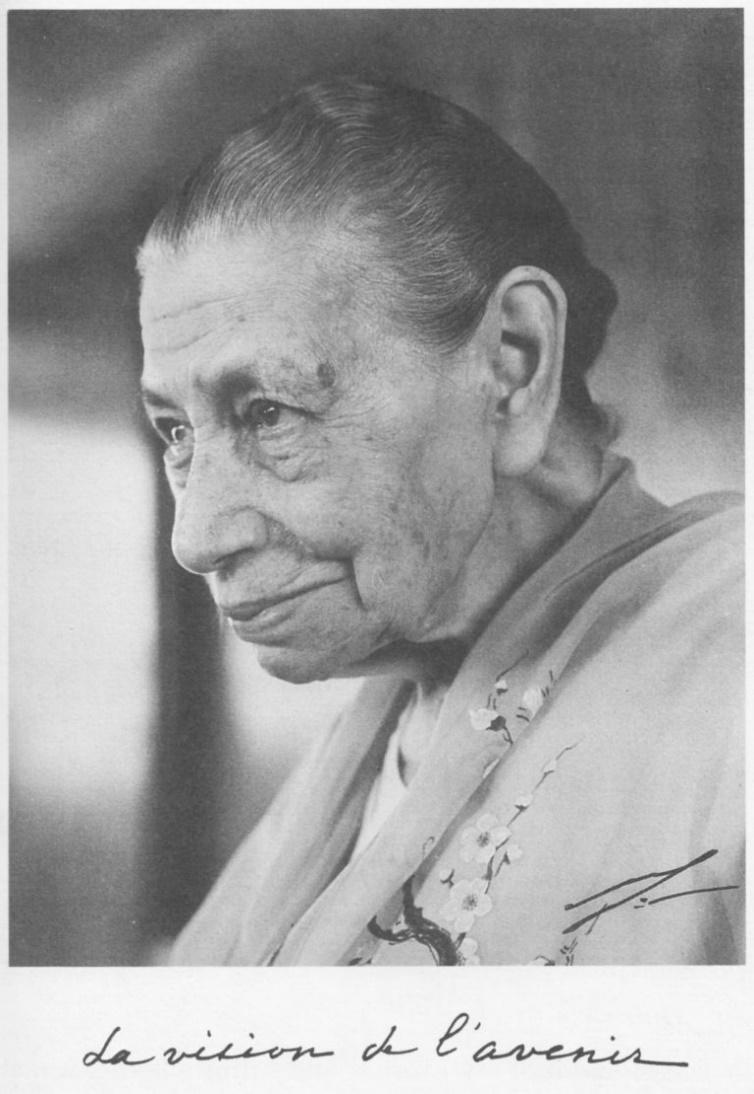 [The Vision of the Future]